Namibia is a fascinating diverse travel destination famous for, among other things the highest dunes in the world in Sossusvlei, which are part of the oldest desert in the world: the Namib Desert. These dunes, like Dune 45, are the most photographed dunes in the world! Due to the vast size of the country that for a huge part consists of desert, The Republic of Namibia has the smallest population in Africa. It is bordered by South Africa, Angola, Zambia, Botswana, and Zimbabwe. Other famous highlights in Namibia are Deadvlei, the Fish River Canyon, Spitzkoppe, Waterberg Plateau Park, and the Kalahari Desert. Walvis Bay Lagoon is also worth a visit because it is known for its large colony of South African flamingos basking and feeding in the shallow waters. With several cultural attractions, Namibia's capital city Windhoek is also worth a visit!

With the largest population of free-roaming black rhinos and cheetahs, Namibia is also a popular safari destination. Most tourists choose Etosha National park for a great safari experience. This is also home to the tallest elephants in Africa and together with Mali, the only place to see desert elephants.

And did you know the Namib Rand Nature Reserve is one of the best places in the world for stargazing and star photography?

Check out this ultimate Namibia guide where I share the most popular places to visit in Namibia including some of the best things to do and things to know before you travel to this stunning country of endless horizons, for example, the best time to visit, safety in Namibia, and required vaccinations. 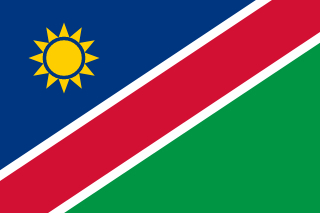 Namibian Dish
Oshifima, a traditional porridge often served with a stew of vegetables, meat, or fish. 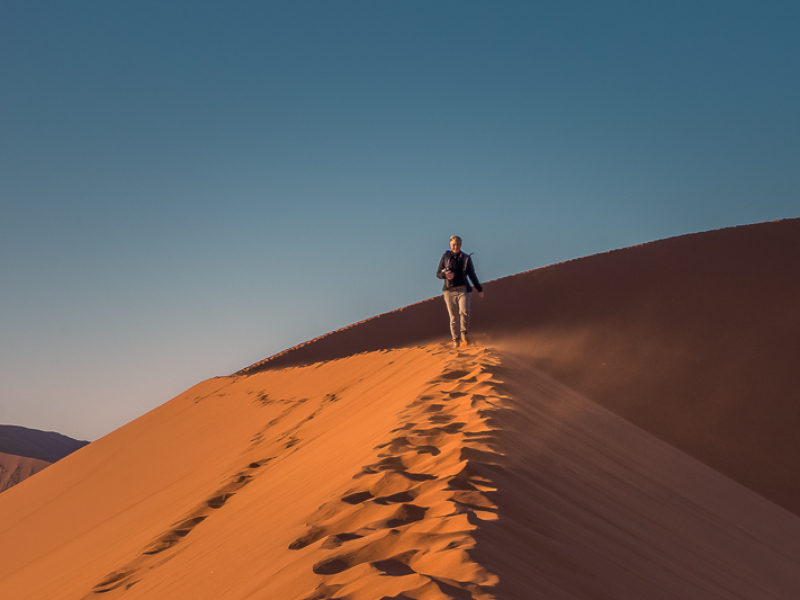 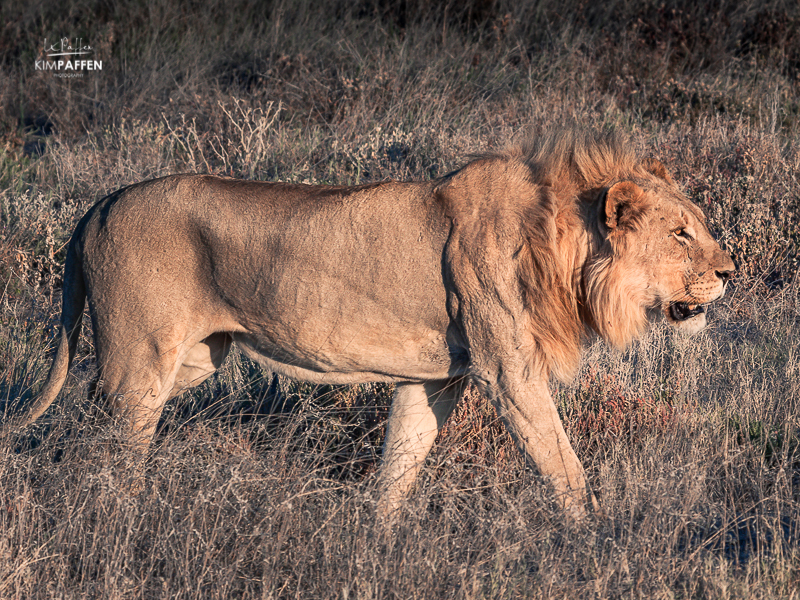 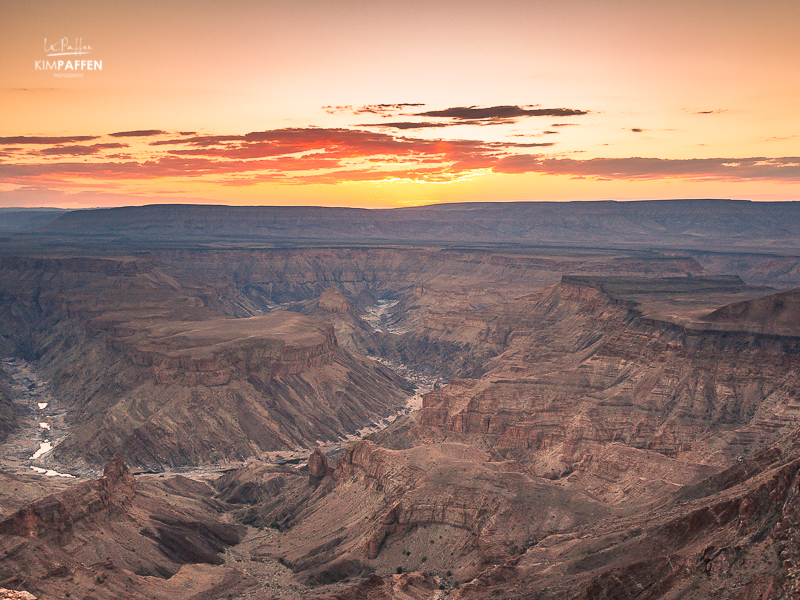 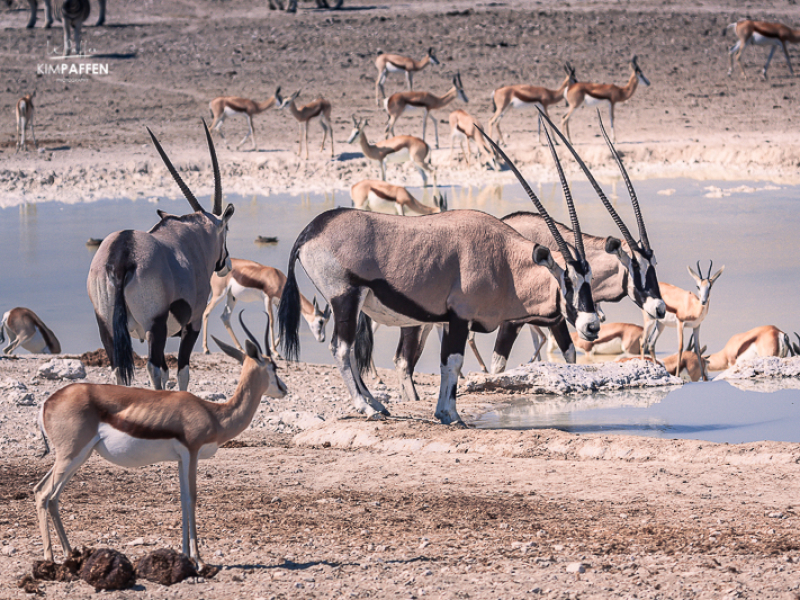 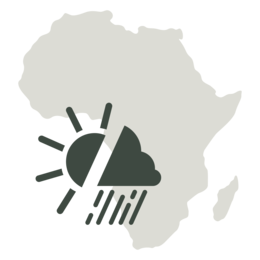 Namibia can be visited throughout the year, but the best time to visit Namibia is in the dry season from July to October. This period is good for game viewing because of the wildlife clustering around waterholes. With around 20 degrees Celcius, temperatures are pleasant, and the chance of rainfall is low.

The peak season in terms of tourists is in the Namibian Winter season, from June to September. In this period there is virtually no rain and no clouds.

Things to know before you travel to Namibia

Traveling to Namibia for tourists is safe, but - as almost everywhere you travel - be aware of safety risks. The country has a relatively high crime rate because of pickpockets and robberies. A friend I was traveling with, lost its phone and purse because of pickpockets in Windhoek. Even with this incident, I felt safe in all the places I've visited in Namibia.

All visitors require a passport valid for at least 6 months beyond the intended stay and have sufficient pages for entry and exit stamps. All visitors must also have a valid return ticket. Only a few countries need a visa to enter Namibia, but a lot of holders of ordinary passports are exempted from VISA requirements when traveling to Namibia for holiday/tourism purposes for a maximum stay of 3 months within one calendar year. Exempted are for example Netherlands, Germany, the US, and the UK. Do I need a Visa to travel to Namibia? Check the Department of Immigration Control and Citizenship for more details.

When it comes to responsible and sustainable tourism, Namibia is very serious and successful. Namibia was the first African country that emphasizes the importance of conservancy in its constitution which ensures that all conservancies are legally recognized. Namibia won different awards for their conservation efforts, which are linked to sustainable tourism. The conservancies are run by local communities and many locals are also employed as conservation guards to protect wildlife from poachers. Apart from conservation efforts to protect wildlife, they also have activities to protect their ecosystems, cultures, and traditions.

Most travelers to Namibia require Hepatitis A and TDAP (Tetanus, Diphtheria, Pertussis). Sometimes it's also advised to take Typhoid, Cholera, Hepatitis B, Rabies, and Yellow Fever. Namibia is not infected by Yellow Fever but has border countries that are. As a result, a yellow fever vaccination certificate is required from travelers arriving from an infected area. Malaria is a risk in some parts of Namibia: the entire northern third of the country from November to June and along the Kunene River and in Kavango and Caprivi regions throughout the year. Use antimalarials if you visit these areas. Consult a travel clinic for personal advice regarding your travel plans.

Namibia has 11+ indigenous languages, but English is the only official language that almost everyone speaks. People commonly speak two or three languages and more than 49% of the population speaks Oshiwambo (Namibia’s native language), followed by Khoekhoegowab (Nama/Damara), Afrikaans, (Ru)Kwangali, Kavango, and (Otji)Herero. German is also a common language in Namibia as this was the official language for about 30 years until 1915.

The time zone in Namibia is the Central Africa Time Zone (CAT), which is two hours ahead of Greenwich Mean Time (GMT+2) from October to March and one hour ahead of GMT in the winter months, April to September.

Things to do in Namibia to cross off your bucket list 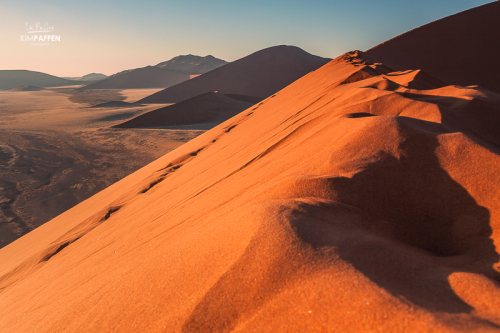 Climb the highest Dunes in the World in Sossusvlei

Sossusvlei is a must-see if you travel to Namibia. The huge orange and red dunes - of which some are over 325m high - are very photogenic! However it's one of the most popular attractions to visit for tourists, you still have the feeling of being isolated. Climbing the over 5 million years old Dune 45 in the early morning, before the first light hits the dunes, will treat you to spectacular views and sunrise over Sossusvlei. While admiring the view you also have the.chance of spotting a Gemsbok, the national animal of Namibia. 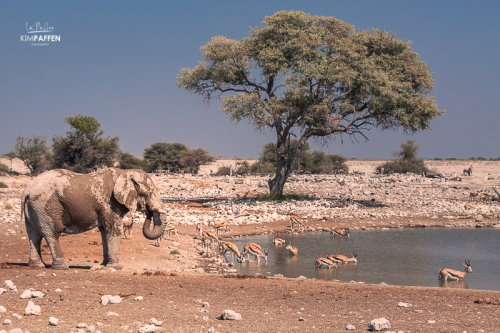 On Safari in Etosha National Park

No Namibia-trip would be complete without going on a wildlife safari in Etosha National Park. With over 110 mammal species it's a great possibility to spot wildlife. You don't have to wait long to spot the first animals as Etosha has many water holes where large groups of animals come to drink. You can find Elephants, Lions, Burchell's Zebras, Giraffes, Black Rhinos, Springboks, and so on! Rent a 4x4 to do a self-drive in Etosha or join a Safari tour. Don't forget to visit the vast Etosha Salt Pan, forming part of the Kalahari Basin. The Etosha pan, meaning 'Great White Place' is dried up most of the time, but you are still able to find some wildlife around the water pools. It's a protected area and since 2016 on the tentative list for nomination by UNESCO. 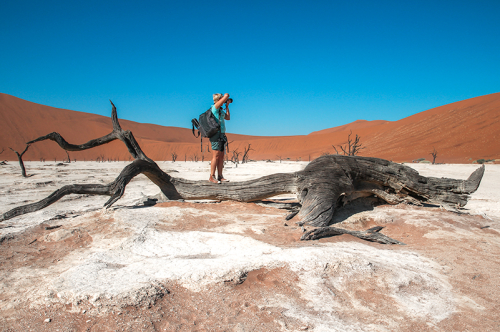 Deadvlei is probably the most photogenic spot in Namibia with lots of black trees that died several hundred years ago. The contrast of the black trees against the dried-up white clay ground and the orange dunes in the background is simply stunning. Deadvlei gives you the feeling of being on a different planet. Add Deadvlei to your Namibia itinerary and don't forget to bring your camera on your hike to 'Dodevlei'. 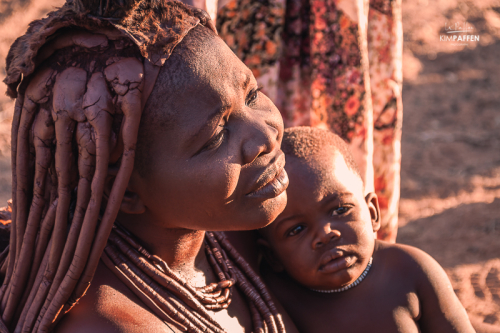 Learn from the Himba Tribe

Don't leave Namibia without meeting the fascinating cultural Himba tribe. The semi-nomadic Himba people of North West Namibia breed cattle, sheep, and goats and are mostly famous because of applying red ocher cream onto their bodies and hair. The OvaHimba people are considered the last nomadic people of Namibia and therefore worth it to learn more about this cultural group. Are the Himba a disappearing culture? 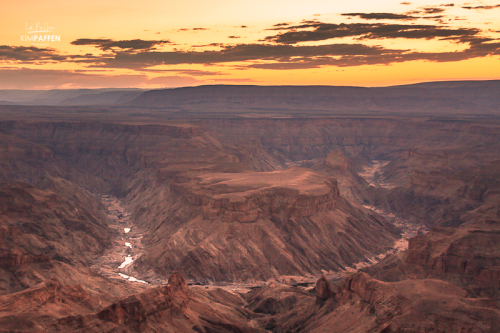 The Fish River Canyon is breathtaking. It's the largest canyon in Africa and the second-largest in the world. Don't miss out on a sundowner from one of the viewpoints over the Fish River Canyon. The area is also a hiker's paradise as you are able to go on a multiple-day hike through the canyon. 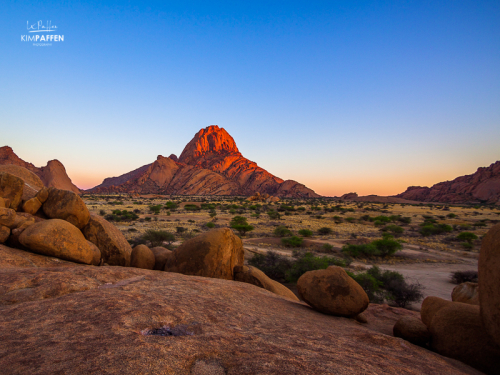 Camp under a sky full of stars in Spitzkoppe

Spitzkoppe is located in the heart of the Namib Desert and one of the most beautiful places I've visited in Namibia. Being surrounded by giant granite peaks is simply stunning. Spitzkoppe is the best destination in Namibia for rock climbing and hiking. Camping in the middle of these granite peaks while enjoying the night sky is amazing! It's one of those dark places on earth where you have a great opportunity to view and photograph the stars and the Milky Way. Don't forget to watch the first sunlight hitting the granite peaks; that makes for some stunning pictures too! Spitzkoppe also has lots of rock paintings to admire.