What are the Big 5 animals of Africa and where to find them?

What are the Big 5 of Africa?

The Big Five animals of Africa, in short, 'The Big 5' include the African elephant, rhinoceros, lion, leopard, and Cape buffalo. These five big game animal species are found on the African continent in the Southern and Eastern parts of Africa. As the name suggests, they are not the heaviest or 5 biggest safari animals.

If it was about the size or weight of the African animal, a gorilla or hippo could also easily fit in. A hippo is for example three times heavier than a Cape buffalo and a male gorilla and male lion can both weigh up to 225kg.

Why are they called the Big Five animals?

The Big Five game refers to the 5 African animals that big game hunters in the late 1800s, during Africa's colonial period, considered the most dangerous and difficult wild animals to track and hunt on foot. Hunting these African game animals got them the biggest prices and trophies. Dangerous, because of their behavior when they feel threatened or get injured. Sadly, this wildlife is still hunted today but luckily there are also a lot of conservation initiatives to protect these threatened species that are decreasing in population and struggling because of habitat loss.

Nowadays, the term 'Big Five' is more a commercial term used by safari companies to sell their 'African Big 5 Safari trips' and to describe the Top 5 safari animals to see on a game drive. This made them also the most famous large African animals to look for on a safari trip to Africa. Ticking off the Big 5 is therefore on many travelers’ bucket lists. However, there's much more wildlife worth seeing roam freely in their natural habitat, like the cheetah, a tall elegant giraffe, a spotted Hyena, or a pack of African wild dogs. Even the smaller creatures, like Dung Beetles or all the colorful birdlife play an important role in the ecosystems. So, with this article I also want to raise awareness about the fact that there's more to Africa than spotting the Big Five, which is a hunting term after all.

The Big Five animals in pictures

The Big 5 safari animals of Africa in one black and white photo collage. 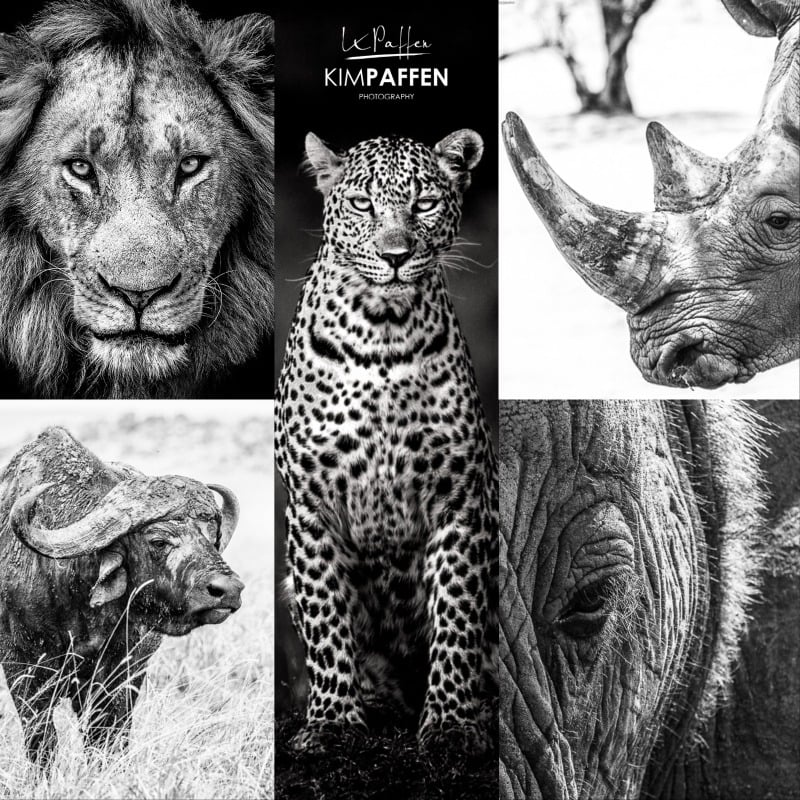 The African savanna elephant is the largest land mammal in the world and can reach up to 3 meters in height and can weigh up to 7 tons. The African forest elephant is 3 feet shorter. Elephants communicate across a large distance at a very low frequency through their feet and the soil that cannot be heard by humans. Elephants live in a herd that is led by the 'matriarch' female. The elephant is threatened by ivory poachers for their tusks. 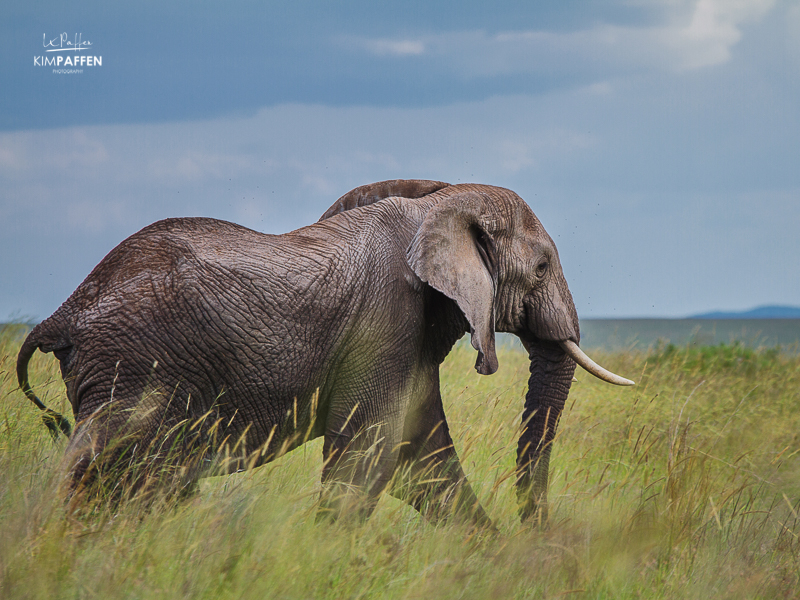 2. Rhino: most endangered species of the Big 5

The Rhinoceros is the most endangered species of the Big Five due to rhino poaching and illegal trade in rhino horns. There are two species of rhino in Africa: the White Rhino and the Black Rhino and five subspecies.

The names of the rhino don't have anything to do with color as both species are grey. The name of the 'white' rhino is a corruption of the Dutch word 'wijd' (wide), which refers to the wide mouth or square lip of the white rhino. A rhino can weigh up to 5000 pounds and its horns can grow up to 5 feet long. Rhinos have poor eyesight but excellent hearing and sense of smell. 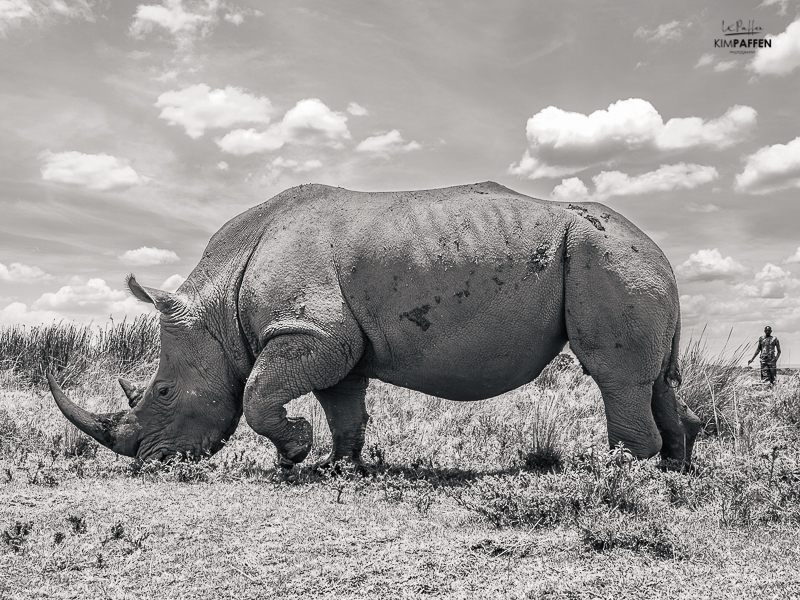 An African lion is the largest predator on land. Preys of the lion include zebra, impala, giraffes, and other herbivores like wildebeest. A group of lions is called a pride and males are easily distinguished from females because of their large manes. The darker the lion's manes, the older he is.

A male lion is sometimes referred to as the king, but in reality, lions don't have a permanent social hierarchy. The dominant male in a lion pride can change at any time. The females hold the territory and stay with the pride in which they were born. They also do most of the hunting and take care of the cubs. Lions use their roar as a form of communication and can be heard up to 5 miles away. 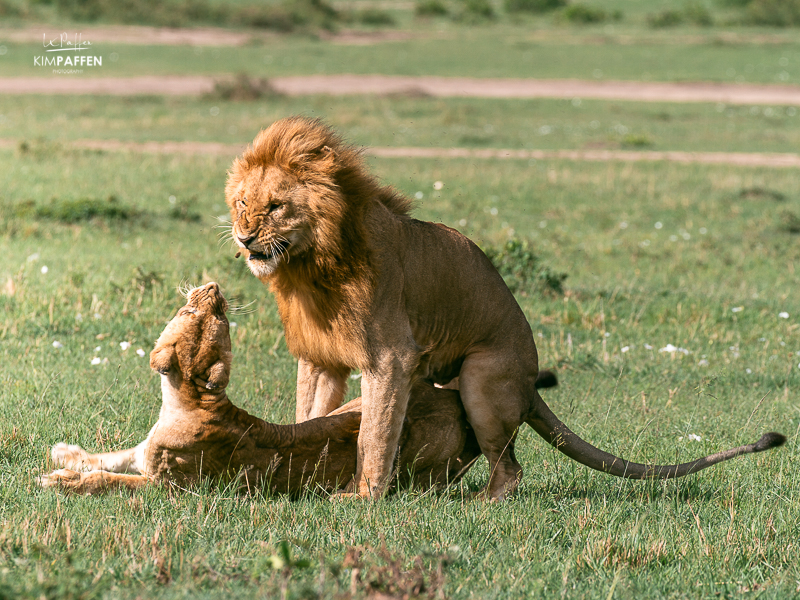 The African leopard is the most solitary and elusive animal of the big 5, staying hidden during the day. They are the least seen of the Big 5 and on most occasions found alone. The leopard is nocturnal and mainly hunts at night. Their kills include zebra and antelopes like Thompson Gazelle. The elusive leopards hide their prey in a tree to prevent lions and hyenas from stealing it. A lion and leopard both belong to the African big cats, but they can't get along. A lion will kill a leopard if it has the chance. A leopard is also a good swimmer and occasionally eats fish. 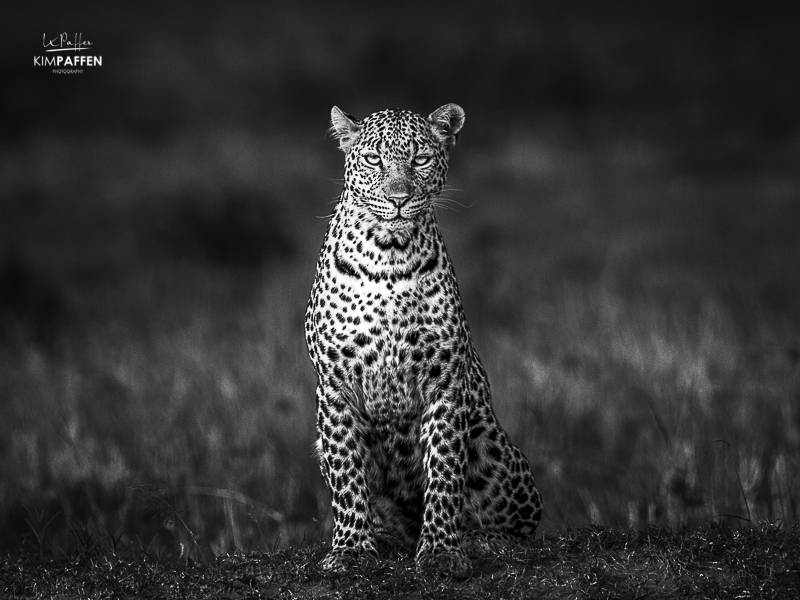 5. Cape Buffalo: most dangerous to humans

The African buffalo is very territorial and protective and is probably the most dangerous animal of the big five to humans. If this cow-like animal feels threatened it can become very aggressive and charge with astonishing speed. Buffaloes are mostly found in groups and large herds and spend a lot of their time grazing. Both male and female buffaloes have horns, but the males' horns curve and come together in the center, forming a big bony plate called a boss.

The primary predator of the buffalo is the lion. A buffalo will try to protect and rescue another member of the herd and they have even been seen killing a lion after the lion had killed a member of the group. Although the African buffalo and water buffalo resemble each other, they are not closely related. 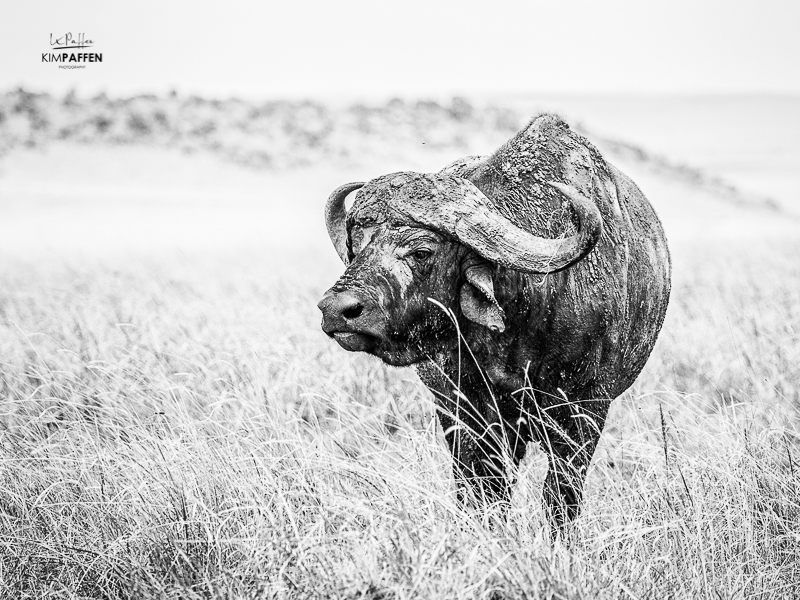 Where to find the Big Five in Africa?

The Big 5 animals live on the African continent. You can find all of the Big 5 in Southern Africa and East Africa. The African countries where you can see the Big Five are:

Not all of the above countries where the Big 5 live are ideal for a safari trip in terms of safety and existing numbers of the Big Five species. 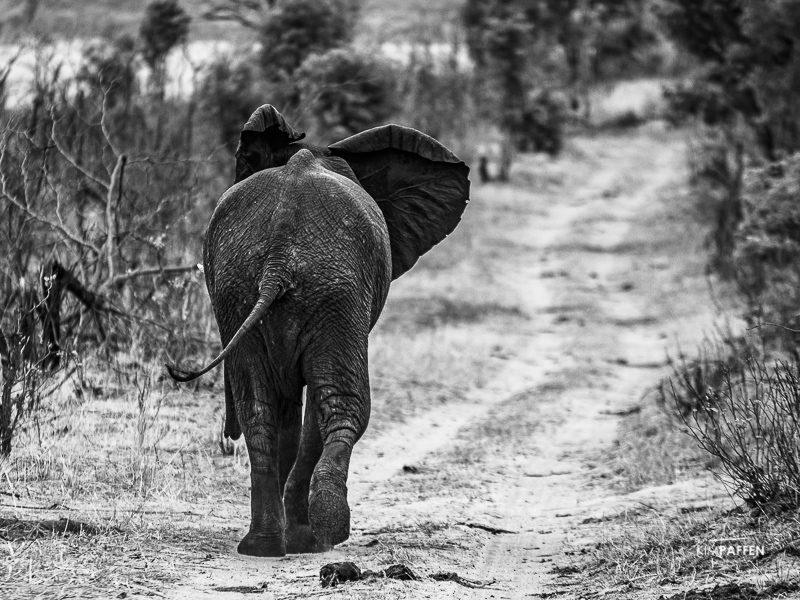 What are the best Big Five safari destinations?

The best countries to see all the big five on safari are South Africa, Kenya, Tanzania, Botswana, Uganda, and Namibia.

However, in Namibia, you can't find all of the Big 5 in one place. In Etosha National Park you can only see 4 of the African Big Five. You can't find the buffalo there, but it's the best place in Africa to see the black rhino. They often concentrate around a water hole where tourists can sit to observe these critically endangered animals.

In Uganda, you can't see rhinos in the wild, but you have a chance of seeing all the Big 5 when you visit them up close at Ziwa Rhino Sanctuary where they roam freely but are protected by rangers 24/7. In Uganda, you can also see the endangered mountain Gorilla and our closest relative on a chimpanzee trekking or chimpanzee habituation. South Africa is one of the most reliable Big Five safari destinations to spot all the Big 5. South Africa even honored the importance of the Big 5 animals by putting each of the 5 animals on their bills.

What are the best places to see all of the Big 5?

The best chance of seeing the Big Five on a single safari or even on a single game drive is at the following places: 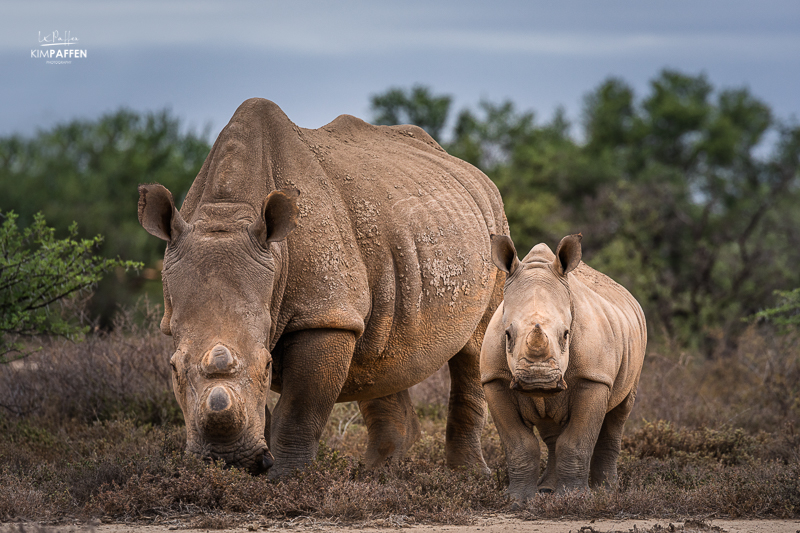 When is the best time to see the Big Five in Africa?

The high season for a safari in Africa is from July to October. It's the cooler dry winter which makes a big 5 sighting easier because of the thin and dried-up vegetation. The lack of rain also means animals congregate around flowing rivers or larger lakes to drink. However, the shoulder seasons are also perfect to find the big 5 in Africa and it's less touristy.

Africa's Big Five are of great concern for wildlife conservationists due to trophy hunting, poaching, and habitat loss. Most of the Big 5 animals are listed as vulnerable or (critically) endangered species by the International Union for Conservation of Nature (IUCN). Hunting is sadly still allowed to some degree, but Africa now also has strict laws to protect and conserve many African animal species.

The African Big 5 animals and other endangered species are widely protected in National Parks and government-run game reserves; partnering with the surrounding communities to reduce the human-wildlife conflict. Tourists contribute directly to big 5 wildlife conservation by going on safari in Africa and paying park fees. 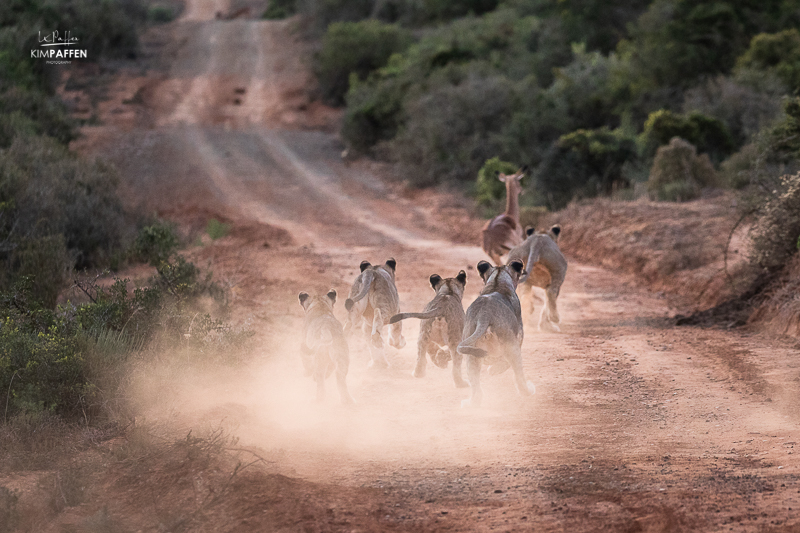 Apart from having the Big 5 in Africa, there are also other animal combinations formed that include 5 African animals. Africa also has the Shy Five and Little Five. It even named the Ugly Five, however, which is very subjective.

A guide to the Big 5 animals of Africa

I hope this article was helpful to learn more facts about the African Big 5 animals, including why they are called the Big Five, in what countries these Big 5 safari animals are found, and the best time of spotting them with a side note that there's more to Africa than spotting the Big Five. Smaller creatures play in an important role in the ecosystems as well. People who are going on a safari in Africa shouldn't be disappointed when they don't tick off the Big Five. Try to appreciate every single animal, big or small. Even trees, plants and flowers. Every sighting is a gift of nature. Everything is connected and we can appreciate this more.

You would help me a lot by sharing this guide to the Big 5 in Africa on your social media or pinning it on Pinterest for later use. Want to keep up to date with my travel? Follow me on Instagram. If you are inspired to go on a safari to Africa, you can find all of my writing about Africa and its countries in my Africa travel guide.

Pin the Guide about the Big 5 animals on Pinterest! 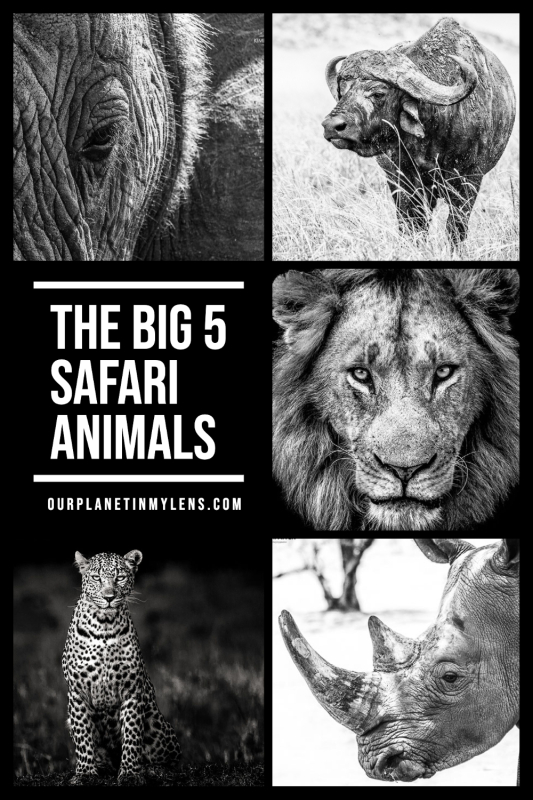 Guide to the Big 5 of Africa